The summer of 2016 saw Vancouver-based artists and the public alike engaged in a unique event: printmaking huge woodblocks using a full-size steamroller as a press. The first big print event took place on Granville Island. Twelve artists carved 4’ x 8’ sheets of plywood,  blocks were inked and printed by steamroller…not once, but four times each.

Big Print Chinatown brought together another team of artists and printmakers, carving and printing another dramatic series of 4 ft X 8 ft woodcuts – focused on the richness of Vancouver’s Chinese and Aboriginal cultures – and printing them by steamroller at Dr. Sun Yat-Sen Plaza.

The Steamroller exhibition includes prints from these two events.

Here are links to videos of the printing events.

Designed for all levels of experience in printmaking, from beginners to advanced levels, the workshop will cover the basics of relief printmaking, including tools, sharpening, papers, inks, colour mixing and registration technique.  Incorporating a range of chisels, gouges and other tools, the workshop will explore some of the textural possibilities that can be achieved in wood and linocuts.

During the two days of this workshop, participants will develop their own design, translate it to the block, and carve and print their edition. There will also be a collaborative process for the workshop — each participant will contribute to a collective piece which will be hand printed on a roll of Mulberry paper and mounted as a print mural at the end of the workshop.

Richard Tetrault is a Vancouver printmaker and muralist. He has exhibited his work locally and internationally and taught for years at UBC and Malaspina Print Co-operative.

This is the 7th of Richard Tetrault’s popular printmaking workshops. He is a master printer and an excellent teacher and his workshops, full of repeat participants, have launched several printmaking careers on the island.

Richard will be assisted in the workshop by Nora Layard and Gillian McConnell.

To register or for more information please contact Celia Duthie – celiaduthie@gmail.com or 250-537-9606.

We are delighted to present an opening exhibition of ‘new-to-the-island’ Sibeal Foyle and Peter Pierobon. ‘Second Growth’ reflects their shared passion for the natural world and their new life here on Salt Spring island.

Born and raised in Ireland, Sibéal Foyle graduated with a BFA from the Belfast College of Art, then emigrated to Canada where she completed her MFA at the University of Calgary, Alberta. She has been the painting and drawing instructor at Kwantlen Polytechnic University for 28 years; in her own work her primary interest has been to create narratives involving her family, community, memories from the past and the cultural and political happenings of the day. In her new work she has focussed on the drawing and painting of natural forms and phenomena. Simple, striking and enticing.

Peter Pierobon was born and raised in North Vancouver.  He studied and worked with Wendell Castle, the leading artist in contemporary studio furniture design. Peter’s work is in many museum collections from the Smithsonian to the National Gallery and he has exhibited and taught internationally for more than 30 years.  His work combines original sculptural  design with master craftsmanship; every piece unique and brilliantly crafted. Duthie Gallery has proudly exhibited Peter’s work since 2005. 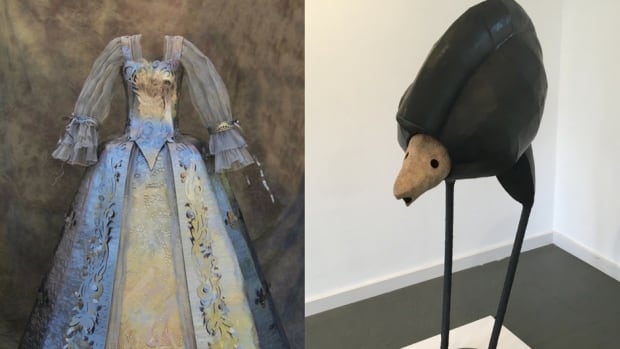 Thought the two artists have drastically different styles they both agree that steel is an underappreciated artistic material. (Bev Petow/Jennifer Chen)

Two West Coast artists have joined forces to convince the world that steel can be a delicate and airy medium while still making bold artistic statements.

“It’s true, I watched people come in for the opening and I watched the jaws drop. It’s a very powerful show,” said gallery owner Celia Duthie. 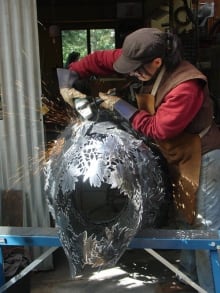 Bev Petow works on the upper bodice of one of her many steel dresses currently on display on Salt Spring Island.

Robb is known for sculpture work creating fantastical creatures that would feel at home on the set of films like The Dark Crystal.

“His work depicts a world that is not one I’ve ever seen,” Duthie told North by Northwest‘s Jennifer Chen, during a visit to the gallery.

“It’s weird and alien and bizarre, but they’re friendly creatures.”

Many of the creatures have a marine critter-like feel to them which Robb said likely came from a harder period in his life.

“When I first got to B.C. I was very poor so I tried to hit the beach at low tide to find food to eat,” he said. “So I’ve been influenced by creatures that live particularly in the intertidal.”

Petow’s metal dresses were also inspired by a time of hardship. In 2009, Petow’s close friend died.

The two had spent many hours together sewing their own clothes before Petow moved into metal work.

“I went out to my studio to make something in mourning for her, basically, and that’s what came out,” the Sooke-based artist said.

Much of her work is inspired by political issues or historical moments, including one intricate dress that celebrates the era of the French Revolution.

Petow said the revolt signified one of the first times Europeans stood up against the aristocracy.

“I think we’re living in a time where that could happen again,” she said.

Delicacy of Steel is on display at the Duthie Gallery on Salt Spring Island until August 15th.

With files from CBC Radio One’s North by Northwest

Delicacy of Steel is an exhibition of metal sculptures by Bev Petow, featuring her meticulously crafted steel dresses from the haute couture of the French Revolution – the ‘flamboyant self-indulgence of its “one-percenters” – to the loose body-conscious moderns with their fast fashion – these works of fine sculpture reflect a deeper concern with the uneven fabric of society so explicitly conveyed through attire.

Excellent review of Imprints 2017 by Elizabeth Nolan of the Driftwood.

Susan Benson is on site at the gallery working on her Portraits of an Island series Friday, Saturday, Sunday 11 – 4. Show continues till May 7th.